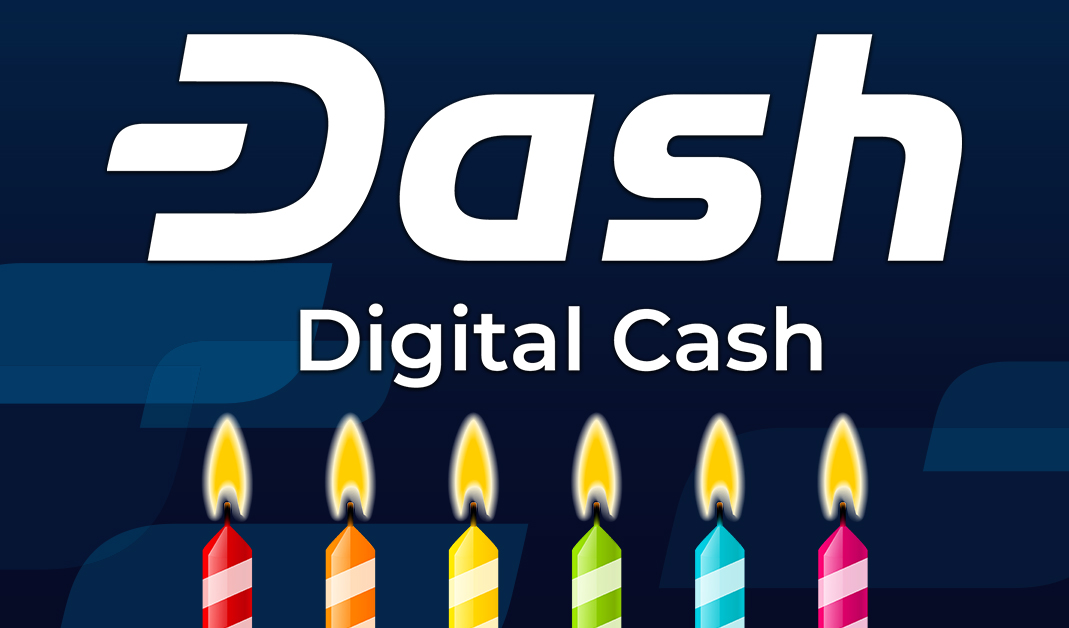 On January 19th, Dash turned six years old, celebrating six years since the genesis block was mined for Xcoin, which was quickly rebranded to Darkcoin and later to Dash in early 2015. Over the course of its impressive run of over the better part of a decade, Dash has pioneered numerous innovations, consistently advancing the state of decentralized blockchain and payments technology and inspiring generations of imitators. Below is a rundown of Dash’s key developmental achievements over the past six years.

True Digital Cash With Speed and Privacy
A hallmark of its approach since rebranding to Dash in 2015 has been a focus on improving on Bitcoin’s original promise of peer-to-peer digital cash by solving some missing elements from its initial design, creating a functioning payments system for the average consumer.

Leveraging Dash’s incentivized infrastructure, InstantSend employs quorums of masternodes to lock transactions instantly. In a cryptocurrency first, this prevents them from failing or being maliciously double-spent, making a transaction both final and reliable in seconds, as well as able to be re-spent instantly with the same level of security. InstantSend is active by default on nearly all transactions, creating an unparalleled instant payment experience of moving funds to anyone anywhere in the world instantly with high security and low cost. This stands in contrast with most competing cryptocurrencies which have unreliable transaction security before being confirmed in a block several minutes later, which can result in fee unreliability as users bid for faster confirmations. Several cryptocurrencies such as PIVX and SmartCash have imitated InstantSend functionality.

Dash’s original innovation under the previous Darkcoin branding, PrivateSend provided one of the first major improvements to cryptocurrency privacy, initially leading the “privacy coin” phenomenon which has included many other prominent cryptocurrencies before Dash’s transition to a pure payments and usability focus. Based on the CoinJoin method of mixing together coin inputs and broadcasting the result so that the transaction’s origin is hidden, Dash innovated on this by leveraging the masternode network to facilitate the mixing process between participants, removing a layer of trust previously required by competing mixing solutions. To date several more primitive and separate mixing solutions are still in use by various cryptocurrencies including Bitcoin, Bitcoin Cash, and Ethereum.

Masternodes Incentivized Infrastructure
Perhaps the most significant innovation in Dash’s history is the masternode, an incentivized node providing special functionality to the network. Masternodes receive a portion of the block reward of newly created coins, as well as some network usage fees. This allows them to run the infrastructure necessary to provide a host of extra services and functionality to the network without relying on goodwill or outside financial interests. Additionally, each masternode must prove ownership of 1,000 units of Dash, preventing sybil attacks with malicious entities spinning up thousands of nodes to overwhelm the network. Masternodes are the backbone of nearly every single Dash innovation including instant transactions, privacy, 51% attack resistance, governance, ecosystem self-funding, and now Dash Platfom.

The masternode has been explicitly copied hundreds of times, with 319 masternode coins listed to date, as well as many projects employing similar elements under different names.

Deployed in 2019, deterministic masternode lists offer a streamlined querying of the masternode network. Previously, services were required to query the entire Dash blockchain to find masternode collaterals on the blockchain, which required downloading the entire copy of Dash’s blockchain, excluding services not running a full node. Now, thin clients can access masternode functions through a deterministic list of masternodes not requiring access to the full Dash blockchain. This has made services such as InstantSend more streamlined and allowed PrivateSend to be used by thin clients without trusting a full node.

Many of Dash’s features are implemented by using quorums, or groups of masternodes. This allows smaller segments of the network to be used for individual tasks, such as locking transactions for InstantSend, with new groups being used for future tasks, spreading the workload around the network while avoiding reliance on a particular consistent group of nodes. Long-living masternode quorums (LLMQs) in particular allow a larger quorum of masternodes to continue to perform multiple tasks over a set period of time, and has enabled many innovations such as ChainLocks.

Proof-of-Work/Proof-of-Service Evolved Hybrid Security Model
Dash has pioneered a unique approach to network security, creating several key improvements on the traditional proof-of-work mining model, as well as adding the proof-of-service masternode layer to the mix, creating a system more efficient and secure than existing models without the drawbacks of pure proof-of-stake or proof-of-work while combining their best elements.

Dash evolved on proof-of-work’s security model by adding ChainLocks, a function which leverages the masternode network dramatically improve the security of the network. This is done by using quorums of masternodes to lock in the first-seen block on the network, rendering all conflicting blocks invalid. This means that a potential attacker who had acquired a majority of the network’s hashrate would be unable to mine a conflicting chain in secret and overwrite blocks and transactions, essentially making the Dash blockchain permanent after a single network confirmation. An attacker would need to control the majority of masternodes (representing a majority of the coin’s total supply) and a majority of the network hashrate in order to carry out an attack, making such an action prohibitively expensive. This innovation has been copied by other projects such as Zcoin.

In addition to revolutionizing the security of the network, ChainLocks provides an added benefit of significantly improving the efficiency of proof-of-work mining by protecting against selfish and secret mining attacks, as well as minimizing the effect of empty block attacks.

An early innovation on Dash, X11 is a mining algorithm that combines 11 separate hashing functions. This improved on the Quark algorithm by increasing hashes and and adding a priori determination instead of random selection to the function. To date over 153 cryptocurrencies use the X11 algorithm.

Another mining improvement from the early days, Dark Gravity Wave is an improvement to previous mining difficulty adjustment mechanisms. Based on the Kimoto’s Gravity Well function, Dark Gravity Wave improved in several key areas, including fixing the former’s time warp exploit, readjusting the mining difficulty effectively every block, rather than every 2016 blocks as in the case in Bitcoin. This means that sudden drops or surges in network hashrate, which can occur when a host of new miners come on board or go offline for any number of reasons, will have very little effect in the network’s steady stream of blocks and transactions.

Decentralized Autonomous Organization (DAO)
The often-underrated hallmark of Dash’s innovation is the decentralized autonomous organization, or DAO. In contrast with decentralized networks which may incentivize a certain segment (or none at all), Dash offers its holders full control over the funding and decision-making in its ecosystem, creating a system that is fully decentralized, fully autonomous from reliance on outside support, and able to come together in an organized manner. This system prevents a situation where a supposedly decentralized system is run by a centralized foundation or company, or that remains decentralized in structure but due to finances nevertheless becomes heavily reliant on outside interests for development and infrastructure. Dash stands as the world’s first recorded DAO, in full operation since mid-2015.

Dash maintains its independence through the implementation of a treasury, a decentralized and internal funding mechanism. A portion of Dash’s block reward is set aside to cover any necessary elements of the ecosystem outside of miners and masternodes, including development, marketing, media, and any other purpose the network needs. This funding is not under the control of any one party, but rather is up to a vote by masternodes, creating a truly decentralized and autonomous ecosystem. The treasury model has been copied by numerous projects seeking a reliable form of funding.